On 22 August 1985, an engine of British Airtours Flight 28M fails during takeoff, puncturing a hole in the wing fuel tank and starting a fire. The crew successfully abandons the takeoff and stops the aircraft on the runway, but the fire spreads to the cabin. 55 people die before they can evacuate, mainly due to inhaling toxic smoke. The investigation found that fatigue of a part in the engine caused it to fail. 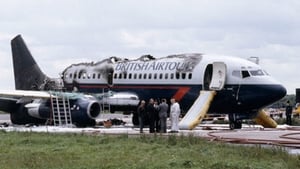