On 6 February 1958, British European Airways Flight 609, carrying members of the famed Manchester United association football team, club officials and journalists, crashes into a house about 300 meters from the end of the runway in Munich after it fails to become airborne, killing 23 of the 44 people on board. The cause of the crash was slush on the runway, which slowed the aircraft down and prevented it from reaching takeoff speed. 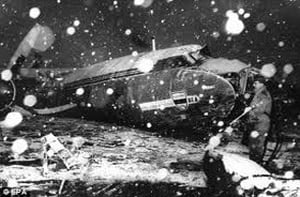